The phone beside our bed rang.  It was 5:20 a.m. on September 9, 2009.  I roused myself from sleep to answer it…my oldest daughter, Kaylee, was on the other end.  “We’re going to the hospital,” she said.  “I can’t take it any more.”  I promised to meet them there.  The time had come…I was about to become a Gramma (although at 48, I was far too young!).  I did a quick sponge bath, threw on some clothes, and hastily applied enough makeup to avoid trauma for the nurses.  Jim got dressed and stumbled down to the car to drive me to town.  We arrived at the Saint John Regional Hospital about 6, after stopping at the Tim Hortons Drive-Thru to grab tea and a bacon breakfast sandwich.  Jim dropped me at the front door, and headed back home (he had to go to work later).  I boarded the elevator and rode up to the Labour and Delivery Unit.  I explained to the nurse at the desk that I was looking for my daughter, who was in labour…she led me down the corridor to the room where I would spend most of the next 15 hours.

When I arrived, Kaylee was in a lot of pain.  Scott was holding up quite well.  We met the two nurses who would be taking care of Kaylee while she was in labour.  One was about my age…we hit it off immediately.  She was the kind of person I like – a straight-shooter, but with a sense of humour.  She’d been doing obstetrics for more than 20 years.  The other lady was slightly younger, and I somehow missed that she had a hearing problem.  I kept wondering why she seemed to be ignoring me when I spoke to her.  Her colleague explained that she read lips (while she was out of the room on a break).  After that, I made a point of looking at her when I talked…

The first “doctor” who came in to examine Kaylee looked like he should have been wearing a “letter jacket” and holding a basketball rather than a stethoscope.  “Does his mommy know he’s a doctor?” I thought.

After a few hours, the doctors decided it was time to give Kaylee the epidural she wanted (I went “au naturel” for all three of my labours – I couldn’t talk Kaylee into that).  The anethetist was very cute…he was tall, and had prematurely grey hair…I kept hoping he would come back to check on her!

Once the drugs kicked in, I was about as useful as tits on a bull.  I had pictured talking Kaylee through breathing techniques as my labour coaches had with me…none of that was needed here!  I sat down on one of the rather uncomfortable chairs, and wished I’d remembered to bring a book.  The hours crawled by…

Scott’s dad made a brief appearance…it was my first time meeting him.  Nice fella.

Labour progressed, but the baby wasn’t liking the process of travelling down the birth canal very well.  About seven o’clock, it was decided that they would take Kaylee to the operating room, and attempt to use forceps to deliver the baby.  If it didn’t work, they would do a C-section.

Only one other person was allowed in the operating room…Scott, being the dad, was the logical choice.  He changed out of his street clothes into the operating room scrubs.  Unfortunately, the string on the pants was broken.  He called me from the bathroom with his dilemma.  I asked the nurse for another pair of pants, which she brought.  Scott put on the second pair of pants, and then decided to make a pit stop before going into the operating room.  He had a small accident…he managed to dribble on the baggy pants while he was doing his business.  I flagged down one of the residents, and explained the situation and the need for a third pair of pants.  Scott was standing behind the bathroom door, throughly embarrassed that I had told the doctor all the details.  I told him that when the baby grew up, I was going to tell her that her father was so excited to see her, that he peed his pants!  If looks could kill, I wouldn’t be typing this now!

The medical staff loaded Kaylee on to a stretcher, and I went to the waiting room.  Scott’s mom was there, and we had a great conversation while we were waiting.  I’d never met her before.  Finally about 10:00, Scott came out and told us that Elise Marie Louise Lee had arrived.  She weighed 6 lbs., 12 oz. and had been delivered by forceps at 9 p.m.  (making her birth date 09/09/09 at 9:00 – will never forget that).  I called Jim, and he said he’d come to pick me up.  Then we went back into the room to see Kaylee and our new family member.  Scott’s dad and his wife arrived soon after that.  Jim came, and I met him in the waiting room and brought him in to see the baby.

We all went home…I went to bed right away…it had been a long day! 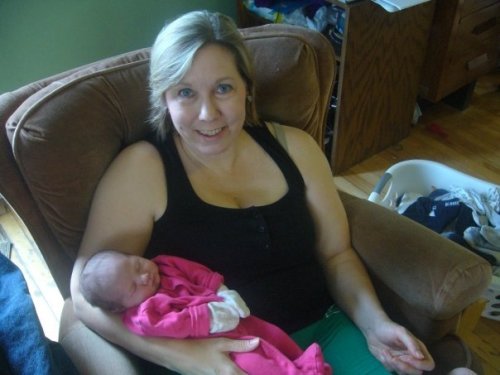 Anna took this photo of me and Elise...she was a few days old here...

Today, Elise is a child of few words: cat, puppy and baby are her favourites at the moment.  She is a very happy baby…rarely gives her parents a moment of trouble.  She is quite squirmy, and will not sit still for a story.  Elise is now able to stand on her own, but hasn’t taken that first step yet.

I always said I wouldn’t be the kind of grandmother who forced people to look at endless photos of her grandchild…guess what I carry in my purse: a photo album filled with pictures of “my” baby in case I run into somebody on the street who doesn’t have Facebook! 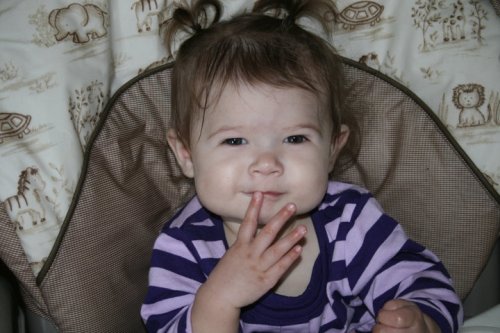