Two Thanksgivings, A Quarantine, A Helicopter Attack, and A Giant Pumpkin…

So, this was our Thanksgiving weekend…it was a busy one.  On Sunday night, we went to Jim’s parents for a combination Thanksgiving/birthday dinner for Jim’s son, Devin.  He turned 17 on October 4th. 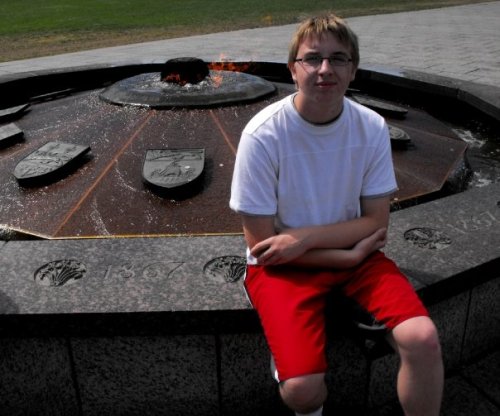 We had a lovely meal: turkey, dressing, mashed potatoes, rolls, green beans, gravy, cucumber/tomato slices, and a delicious turnip puff that Jim’s sister, Kim, made.  I had two helpings!

Unfortunately, Jim’s dad only joined us for a few minutes, sitting way over in the corner by himself…he was suffering from a bad cold, and didn’t want to give it to anyone.  He had spent the past few days in the basement.  Kim’s husband, Chris, pointed out that Gordon couldn’t have been suffering too much…he had the big screen TV, computer, and a fridge nearby.  Gordon came up to watch Devin open his presents: he got some clothes, lots of money, and a remote control helicopter that Jim bought for him.  It was fun watching it fly around, although it didn’t fly very high on the first night…it wasn’t fully charged.

Dessert was yummy…my blueberry pie, Jim’s mom’s pumpkin cheesecake, and purchased carrot cake for the birthday boy, who doesn’t like chocolate.   Jim’s sister, Tracy, had to wait for a minute to bring Devin’s cake out…Jim wasn’t ready with his camera…

Kim invited us to her Halloween party: “Everybody has to wear a costume!”  I have no idea what I’m going to be.  Halloween isn’t my favourite holiday…Jim the smartass suggested I go as a “party pooper.”

We got home just in time for Amazing Race.  I was so happy it turned out to be a non-elimination leg…I like Kevin and his dad!

I woke up Monday morning feeling like a dump truck had driven over me several times…my cold was back!  Jim didn’t feel much better.  I dragged my butt out of bed, made a bagel and tea for breakfast, and started getting the stuffing made for the turkey.  Kaylee, Scott and Elise were coming over for Thanksgiving dinner.

I got the turkey into the oven by noon…then I went out to the garden to harvest some vegetables for dinner.  I got a couple of Red Kuri squash, some beets, three rutabagas, and some mutant-looking carrots (average 4″ long, but fat little things).

I took a little break and sat down at my computer to check e-mail and Facebook.  Jim and the kids were playing with Devin’s birthday present again.  It went really high – almost up to the ceiling!  I was sitting there minding my own business when I felt a breeze over my head…a couple of seconds later, there was a helicopter entangled in my hair! 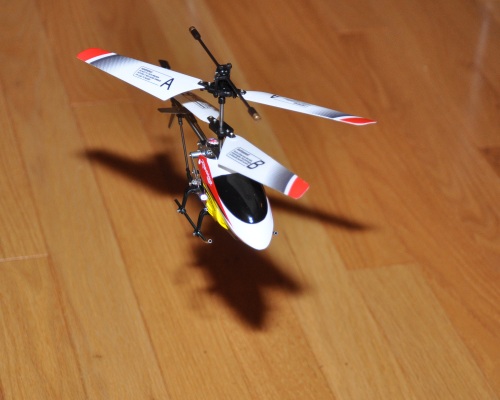 Jim swears it was an accident: “It just lost power!”   I think he was secretly getting revenge for the times I injured him earlier in the week…an elbow to the nose (“It hurt for two days!”), and a whack to the temple with a snow brush handle (we were cleaning out the car, and he asked me to hand it to him so he could put it in the trunk).   I apologized profusely, both times, but warned Jim that there probably would be a third time…these things always happen in threes!

It took a few minutes to free my hair from the vehicle nesting in it.  It was at that point I decided it would be a good idea to have a shower.

Devin and Brianna went to their mom’s house for their second Thanksgiving dinner of the weekend.

Kaylee and family arrived about 4.  Elise is now taking a few steps on her own, and asking what everything is.  I didn’t have much time to spend with her though, because I was busy cooking (and also didn’t want to reinfect her with another cold).

Kaylee wanted some pictures of Elise with a pumpkin, so everybody trooped outside, leaving me in the kitchen with the food.  Jim took the photos below:

Elise and the Pumpkin... 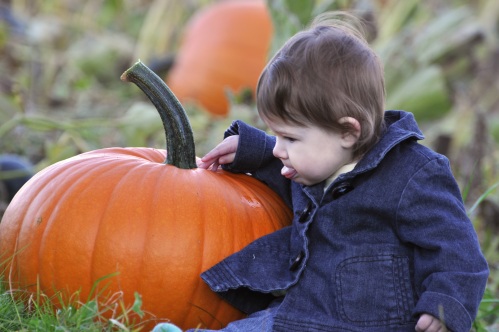 Apparently, Elise couldn’t wait for supper.  She also sampled some fall leaves…I let her take the pumpkin home, since she’d already licked it!

Our Thanksgiving dinner was also delicious, if I do say so myself!  In addition to the turkey, stuffing, and vegetables from the garden, we had whipped potatoes, broccoli, and corn.  Jim made his Grammy’s dressing (which Hope loves), gravy, and a sauce for the beets.

Elise was falling asleep, so Kaylee and Scott left before dessert…I sent them home with a blueberry pie.  The rest of us ate pumpkin pie…it was yummy!  Devin and Brianna made it home just in time!

Jim and I packed the leftover food into lunch containers…Jim is planning a turkey stew for his night to cook…looking forward to it!

24 responses to “Two Thanksgivings, A Quarantine, A Helicopter Attack, and A Giant Pumpkin…”