The Things I’ve Done For Charity…

This post was inspired by my friend, Sunshine, over at Sunshine in London.

Over a 15-year-period, I was involved with a number of non-profit organizations, either as an employee or a volunteer.  For the most part, I enjoyed my time working with these groups, but it can be difficult at times.  Here are some of the memories for your entertainment (the names of the organizations are omitted):

1. Sent letters to several hundred celebrities asking them to donate their “childhood treasures” for a fundraising auction.  We were looking for dolls, teddy bears, trucks, toy trains, etc., and instead we got autographed T-shirts, books, hockey bags, and even a tie!  People obviously didn’t get the concept of the event!

2. Delivered a speech to an event Kickoff Breakfast of about a hundred people with a lovely greenish-yellow stripe under one eye caused by a sinus infection…got my picture in the paper!

3. Was a guide for an event mascot on a city “walkabout.”  The guy who wore the mascot costume was 6 feet tall and about 180 lbs.  At the time, I was 5’6″ tall, and a lot lighter!  I was helping him “see” where he was going, as his field of vision was very limited…it was a lot like leading a blind person around.  It was June, and the costume was hot, despite a small fan installed to keep the wearer cool.  We were walking down the main street downtown, when Mascot Guy says he’s starting to feel faint.  I tell him sternly, “Whatever you do, don’t pass out!”  On our walkabout, Mascot Guy was punched by at least two high school kids (why would you punch somebody dressed like a happy sun?), and hugged by several more.  We were also offered a $20 donation by a man drinking beer on an outside patio at noon…he was clearly drunk, but after a quick ethics discussion, we decided to take his money anyway!  We made it back to the car without further incident.  That was a very long hour! 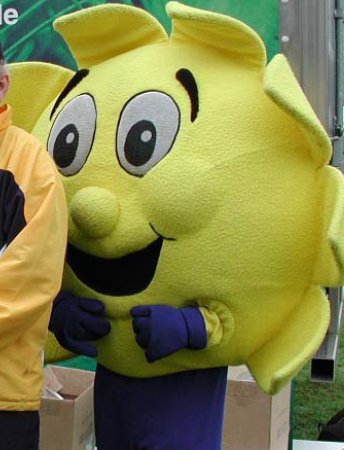 Why would somebody want to punch this guy?

4. Coordinated a charity walk at a local park.  The day of the event, I was eight months pregnant, and the wind was blowing about 60 mph.  Tents were blowing down, paper was everywhere, the ice didn’t come, there weren’t enough electrical outlets to plug in generators…one disaster after another.  Thank goodness for volunteers!  We managed to pull it off!

5. Contacted an American author and convinced her publisher to finance her trip from Austin, Texas to Saint John, New Brunswick to address a conference.  Our only obligation was to feed and house her while she was here (and of course, sell her books).  She had a great time!

6. Manned booths in public places selling raffle tickets.  Strangely, this was one of my favourite jobs…I love meeting new people, especially if I have a cause to promote!

I stopped working for non-profits a few years ago because most of the jobs are term positions, and I needed something steadier to feed my children.  I miss it sometimes…

16 responses to “The Things I’ve Done For Charity…”