After another busy holiday weekend, I’m happy to say that we survived to go back to work this morning…

One of the things I wanted to do on Friday morning when I woke up was get my indoor seeds started…it was sunny and warm on our back deck, so it was perfect for it.  I also made an executive decision that it would be a “jammie day”, which for me consists of a T-shirt and yoga pants (I don’t do yoga…I just like the pants!).  I set my 130 small peat pots out on some metal trays that I bought at Value Village…13 to a tray.  One at a time, I brought the trays outside to fill the pots from the industrial sized-bag of dirt, and put the seeds in.  As I worked, the birds flew past me on their way to the 392 bird feeders on our deck, some brushing close enough to me that I could feel the wind from their wings (I was glad they were birds and not bats!).  I was leaning over the table poking holes with my finger in the soil to deposit the seeds into, when I felt something on my back.  Reflected in the glass of the deck door, I saw that a chickadee had landed on me.  I have no idea what he thought I was, since I didn’t resemble any local tree in my bright orange T-shirt!  I hollered for Jim, who was immersed in a computer game in the living room on the other side of the glass…by the time I got Jim’s attention, my new feathered friend had abandoned his perch.

After I’d finished planting, I carried the trays carefully into our back kitchen, where I set them on a table I hope is high enough to prevent a repeat of Jake’s destroying my plants like he did last year!

Saturday afternoon after picking a few groceries for our Easter family dinner, I decided to try out a new recipe for the rolls…Clover Leaf Rolls.  I spent all afternoon making them…three rises…they looked amazing! 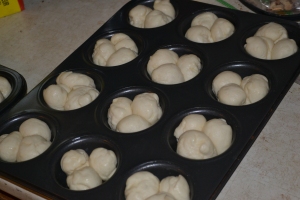 Rolls before putting them in the oven...photo by Anna...

I put them in the oven, being careful to reduce the temperature by 25 degrees, as our oven is quite hot.  Fifteen minutes later, they came out looking like this:

Unfortunately, I baked them a little longer than I should have, and I decided they weren’t good enough for company…I had Jim pick me up some more rolls that afternoon.

While I was baking, Jim had conned the kids into helping him raise the giant birdhouse from last summer into one of the apple trees…it ended up one platform down from its intended resting place, but at least it was finally off the ground!

Remember this from last year? (photo by Anna)

I dragged myself out of bed Sunday morning at 8:30…I had a 12-lb. turkey to make stuffing for and have in the oven for noon, 7 loads of laundry to fold, and mega cleaning to do for our company (Jim and the kids helped after they got up)!  I was still working on all that when Kaylee, Scott, and Elise arrived at 2:30 (dinner was at 6).  Hope had organized a small Easter egg hunt for Elise in the living room (Hope hid them in plain sight).  Elise fed Hope and Jake some of her Fruit Loops (much to Jake’s delight).  Later, Hope took the opportunity to improve on Elise’s hairdo: 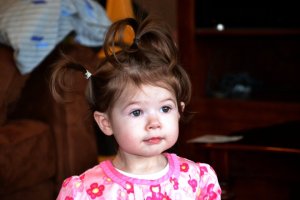 Jim presented Elise with a fun children’s CD by one of the singers from the Presidents of the United States of America (they did the theme song for the Drew Carey Show), Chris Ballew, aka Caspar Babypants.  We also gave her an Elmo building toy, which led to a rather hilarious slip of the tongue from Hope:  “Look Elise…it’s Elmo Kotex!”

Maybe "Kotex" is his horse's name?

Jim’s parents and his sister, Tracy, came a little closer to dinner time.  Jim had made his Grammy Clark’s dressing and gravy…I did the turkey, mashed potatoes, squash (from the garden), cauliflower/broccoli mix, and corn.  Synchronising all that food takes a little talent.  I realized as I was serving myself corn that it was still frozen, and took it back to the kitchen for a couple more minutes in the microwave.  When it was done, I brought it back, and spooned some more on to my plate.  It was only after I finished loading up my plate with other things, that I discovered I’d made two piles of corn!  Other people had noticed, but were too polite to point it out!

After dinner, most people were too full for dessert…Jim and I put the food away in lunch containers, and he put on the bones to boil for turkey soup.  We chatted for a while and then I served apple pie to those who wanted it.  By this time, Elise was so tired she could barely stand up!  Her parents took her home, and Jim’s family left soon afterwards.

We watched Amazing Race before I went to bed…we were all sad to see Jet and Cord eliminated…the Goths have gotta go, especially that whiny Kent! 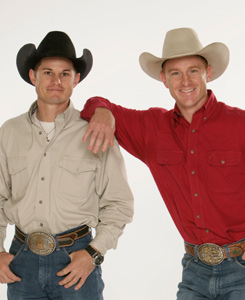