Note: This is a post I started last Tuesday…I’m only just getting back to it!  Pretend you’re in the Twilight Zone while you’re reading, if that helps…

After a LOOOONG week at work, I was very happy when Jim picked me up late on Saturday afternoon for a mystery getaway he had planned for my 50th birthday on Sunday (the 17th).  I only knew that we would be away Saturday night, and back Sunday night, because we needed to travel to the Passport Office in Fredericton on Monday to get passports for Jim and I, and Anna and Hope (Devin and Brianna already had theirs).

Our first stop was Comeau’s, a legendary seafood restaurant near Pennfield, NB.  There was a bunch of people standing and sitting in the entryway when we arrived, so we amused ourselves during the 20-minute wait by looking at some of the items displayed for sale: toilet gaskets, aluminum siding, fishing licences, dulse, and date cookies were among them (Twilight Zone, remember?).  Jim had called that morning for a reservation, but Comeau’s doesn’t do those apparently.  The people coming in were quite a mix: a lot of old folks, a family or two, and some bikers who decided to do a takeout order when told of the 20-minute wait.  Almost no one was dressed up (except the biker chick with the bleached blonde hair, leather fringe vest, and the shiny bling on the pockets of her jeans).

Finally, a table was free, and one of the two waitresses seated us (they never stopped running – I was getting stressed just watching them).  The menu wasn’t quite what Jim had expected either: he thought Comeau’s was a little fancier.  Pretty much everything was deep-fried…we opted to share the large seafood platter.  Neither of us could believe the plate we were presented with: it was stacked four inches high with three pieces of battered fish, 8 fried scallops, 4 fried shrimp, a bunch of fried clam strips, and a few French fries at the bottom of the pile – pretty good feed for the $24.95 they were charging for it!  We ate as much as we could, and had the rest packed in a doggy bag.

When we got back to the car, some thoughtful soul had left a half-consumed can of beer in the parking lot beside my door.  I emptied it (on the ground!), and left it on the picnic table in front of the restaurant…damn bikers!

Jim asked me if I wanted to know where we were going…I thought that would be a good idea.  “St. Andrews,” he said.  I love St. Andrews (technically called “St. Andrews by the Sea”)…it’s a lovely old tourist town in southwestern New Brunswick near the Maine border.

After another forty-five minutes, we pulled into the parking lot of the St. Andrews Motor Inn.  The man at the desk graciously upgraded us to a King Suite (Jim had booked a Queen Suite)…”It’s not very busy tonight,” he said.  Excellent!  We thanked him profusely, and explained this was the first time we’d been away from our four teenagers in almost two years!

Our room on the third floor was called “Kathy’s Suite,” apparently for a deceased woman who had managed the inn.  I hoped Kathy’s current accommodations were cooler than her suite…it was like a sauna in there!  We opened the windows, and then went for a walk in search of snacks, ending up at the Save-Easy grocery store.  We bought some bottled water, sparkling grape juice, chips, and caramel popcorn, as well as multigrain bread and some margarine for breakfast in the morning (our suite had a fridge, stove, toaster, and microwave).  I saw several faces I recognized from Saint John as we walked back to the hotel.

It was still hot in the room when we got back.  We sat on the balcony for a while munching our junk food, and Jim took some photos of the sunset. 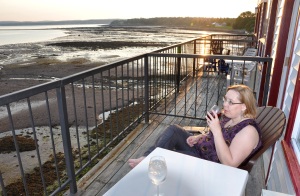 On the balcony with my sparkling grape juice...

Sunset in St. Andrews...photo by Jim 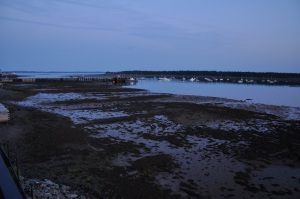 View from our balcony in St. Andrews...photo by Jim

We finally went to bed…I was tired from working all day.  About midnight, Jim was still awake, and went downstairs to have a conversation with the desk clerk about the room temperature (I was snoring by then).  The hotel guy explained that the air conditioner was probably “iced up”, and recommended turning it down a bit.

In the morning, I showered, and then made us breakfast to eat on the balcony: leftover clam strips, scallops and fries from the night before, and multigrain toast.  Jim went down and snagged a couple of donuts from the “continental breakfast” provided by the hotel.  There was a prominent sign in front of our kitchen sink warning that dishes were the guests’ responsibility…a $25 charge would be added to the bill if they were unwashed.  So I washed them, not realizing that one of the wine glasses would break when I stuck my hand into it (luckily, it didn’t cut me).  I left an apologetic note…

We checked out, and drove to our next stop, the Kingsbrae Garden.  We realized right after paying the admission that Jim had left his camera in the car, so I waited while he went to retrieve it.  Even though it was early (around 10 a.m.), the temperature was already high.  We had dressed in cool clothing and applied sunscreen…luckily, it stayed rather cloudy and there was a bit of a breeze!

As we toured the garden, there was a girl who was a dead ringer for Anne of Green Gables…beautiful red hair, porcelain skin, and even a straw hat!  I wish we’d thought to take a photo of her!  Here are some of the dozens of pictures Jim took in the garden: 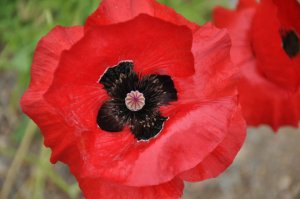 A Bee on Hydrangea...

After about an hour-and-a-half touring the wonderful garden, we were melting in the 32-degree Celsius heat (about 90 degrees for Americans)…we drove back downtown in search of lunch, stopping at a small café the hotel man had recommended: the Sweet Harvest Bakery.  It was packed, but we were lucky to find a table for two.  We sat down and eventually the waitress came over with a handwritten menu (laminated).  It was a Breakfast Menu, but the food looked good, so we went with it.  I ordered the Potato, Onion and Cheese Frittata, while Jim went for a more traditional breakfast: eggs, toast, and bacon.  As we waited (and waited) for our food, we watched the people around us.  We overheard the couple at the next table inquiring about when the Lunch Menu started: they were given the lunch menu!  Oh well…we eventually got our “brunch”, which was delicious!

After lunch, we checked out a few stores in St. Andrews, but didn’t buy much…most of them were tourist traps.  We inquired at the Information Centre about whether there were any old bookstores in town, but there was none.  We found a park and walked down to the water, hoping to cool off with the breeze off the ocean.  I would have loved to wade in, but there were thousands of tiny pieces of broken shells, which probably would have cut my bare feet to ribbons!

We left St. Andrews mid-afternoon, and headed in the direction of home.  Jim told me the kids had forbidden us to be home before six o’clock.  I assumed they were making a birthday dinner for me.  We took the scenic route, managing to stretch an hour-and-a-half drive into four hours: touring St. George, Dipper Harbour, Musquash, checking out fruit tree prices at a Garden Centre, stopping at Jim’s office in Lepreau, and picking up some meat and produce at Olsen’s in West Saint John.

We got home a little before six…I was surprised to see three extra cars in the driveway.  I knew Jim’s brother-in-law was coming over after supper to fill out paper work for Jim’s passport, but I didn’t know what the other cars were doing here!

The first thing I noticed when I came in the door was that the house was clean (no dirty dishes or dirty clothes to be seen, and someone had actually vacuumed!…Twilight Zone again).  The second thing was that almost our whole family was in my living room (all except Jim’s sister, who was away camping in Maine).  “Surprise!” they yelled as I walked in.  You could have knocked me over with a feather (a really BIG feather!)…

Devin was on the deck barbecuing hamburgers, hot dogs and sausages, and the girls had made salads (Jim’s mom and sister had brought salads as well).  There was a vegetable tray and various snacks laid out on the coffee table.  Elise was chowing down on as much caramel popcorn as she could get into her mouth (just like her Gramma).  Jake was howling outside, having been banished because he was behaving badly around the guests.

After supper, I opened my cards and presents, and then had ice cream cake: I was glad the girls had only put six candles on it…I had no trouble blowing them out!

Thanks to Jim and our family for a truly unforgettable 50th birthday!

An apology to my blogging buddies…it’s happened again!  I haven’t been around to visit…I hope to be back on track with my reading soon!  WM