A Cutie, A Cake, Cars, Cousins and Confusion…

It’s been another busy week…welcome to another random chapter of my crazy existence!

1. A Cutie.  While digging through old photos looking for a picture of my paternal grandparents (I didn’t find it), I found this gem from early 1963.  That’s me a few months before I turned two (no cat’s eye glasses yet!). 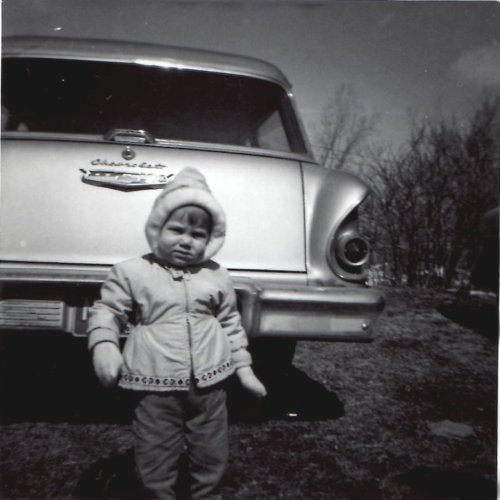 2. A Cake.  We’re big fans of the Food Network and TLC at our house…we especially love watching cake shows like Cake Boss, and The Next Great Baker.  One of the cakes we see a lot is Red Velvet Cake…Hope wanted desperately to try it!  On Friday night, she went on the Internet, and printed out a recipe (Google it…I don’t know which one we used!).  The recipe called for two tablespoons of red food colouring…we didn’t have quite that much, but it still came out very nicely.  The cream cheese icing makes it though!  The only drawback is having to find space in the fridge for the cake.

Hope's and my Red Velvet Cake...

3. Cars.  I told you earlier about Jim’s issue last week with our Toyota Corolla.  Well, the news from the transmission place wasn’t good…with almost 300,000 kilometres on it, spending another $1500+ to repair the car wouldn’t be very smart.  We just forked over $1500 to fix our van.  So…we’ve got a “new to us” car, a 2005 Mazda 6.  Jim is very happy…he likes sporty cars (I’d be happier if it was automatic!).  When Kaylee and Scott found out we weren’t going to keep the Toyota, they offered to buy it.  Scott’s Acura Integra isn’t a very practical family car, and he’s capable of doing a lot of the work on the Toyota himself.  Jim sold it to him for the cost of the winter tires we just put on last fall.  Win-win for everybody!

4. Cousins.  I also found this picture of me and some of my cousins (ca. 1982) while looking through photos.

Left to right: Me (back in the days of the perm), my brother Jeff, Barb, Darin, Larry, and Sandy

These last two didn’t come along until later: 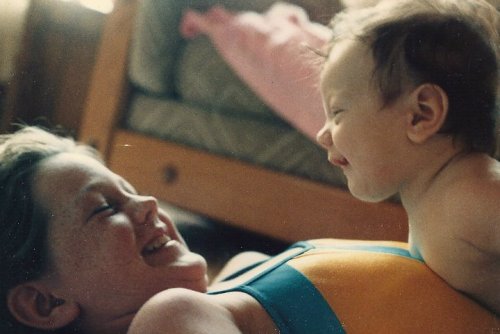 My mom was the second of four sisters…each sister had a girl and a boy.  My cousin, Barb, was nine months younger than I was…we used to spend hours playing in her toy-filled bedroom.  She had more Barbie dolls and clothing than I’d ever seen!  Barb’s younger brother, Darin, was nine months younger than my little brother, Jeff…Darin was into cars and trucks with sirens.  When we stayed at Barb and Darin’s house, I remember having chocolate ice cream for breakfast on more than one occasion…we loved going to visit them!  My cousin, Larry, was ten months older than I was…it was he that I had the famous Iced-Tea Chugging Contest with.  His sister, Sandy, was three years older than I was…she had a major crush on Bobby Sherman when we were teenagers.  We six cousins had a wonderful time playing water volleyball in my Aunt Judy‘s back yard swimming pool!

My cousins Caryn and Ron were considerably younger than we were (their mom is my mom’s youngest sister).  My Grandma had a bed on the living room floor where she spent her days…her spine had deteriorated due to osteoarthris.  I remember Caryn when she was three years old sitting beside Grandma…that little girl was the perkiest kid I’d ever run across…she was always talking!  The last time I saw Ron, he was about 15 months old…he was running around the pool wearing a dripping disposable diaper which had swollen to three times its original size with water, and was threatening to come off any minute!  It didn’t bother him a bit…he just kept going!  It still makes me giggle thinking about it!

Today, all my cousins (except Ron – he’s only 25) have kids of their own.  I’ve only met a couple of them, but have enjoyed getting to know “the second generation” on Facebook…very talented bunch!

My family is currently planning a family reunion, which I won’t be able to attend due to time and distance…I miss them all and wish I could be there!  I’m hoping they take lots of pictures!

5. Confusion.  We were eating supper on Sunday night when Anna asked, “Is the Super Bowl live?”  My children have led sheltered lives, at least when it comes to major league sports…