In the spring of 1975, I boarded a school bus with about 29 other rural Grade 8 students from Kente Public School in Ameliasburg, Ontario, bound for L’Assomption, Quebec (a small town near Montreal).  We were going on an exchange trip for three days, unilingual anglophones being dropped into a place where French was the language of choice.

I don’t remember much of the ride there…I suspect that I must have slept through a lot of it, having spent most of the night before trying to convince my mother that maybe I shouldn’t go after all (I’d never been away from home by myself before).  Mom stuck to her guns…I think the trip probably cost them a fair amount of money (which we were usually short of).  I do remember the songs we heard on the radio, over and over: Fox on the Run, Philadelphia Freedom, and Another Somebody Done Somebody Wrong Song.  Hearing those songs always makes me think of that trip.

We arrived at Polyvalente Paul-Arseneau (the host school) at about noon.  The school housed students from Grades 7 through 13…quite unusual to combine middle school with high school!  The next thing we noticed was that at least half of the students smoked at school (and the adults didn’t seem to mind).  After a welcome speech in the gym (most of us didn’t understand any of it), we were matched with our host students and had lunch in the school cafeteria.  A swim in the school pool was scheduled after lunch.  I whipped out my pocket French-English dictionary, and tried to tell my host, Isabelle, that I did not want to go swimming (it was cool that the school had its own indoor pool, but I wasn’t a good swimmer).  After only three years of rudimentary French classes in Ontario, I’m sure my skills were sorely lacking.  French verb tenses are notoriously complicated, and we’d only learned “present tense” so far.  It took a great deal of wild gesticulating and pigeon French to get my point across.  I sat on a bench while the other kids splashed in the pool.  After the swimming, we went on a tour of the school…it was huge compared to ours!  Then we got on the buses with our host students to go home with them.  Isabelle lived in a neighbouring community called Saint-Sulpice. 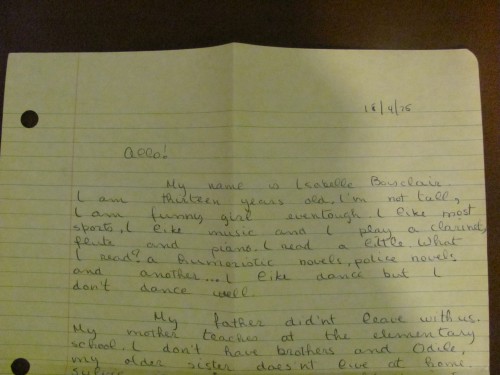 Isabelle's first letter to me...her English was better than my French!

Arriving at Isabelle’s house, she introduced me to her mom, and her two sisters still living at home.  They were nice enough, but I remember very little about them.  We ate supper in awkward silence.  After supper, Isabelle’s mom dropped us off back at her school…we got on a bus which took us to Jerry Park in Montreal for a Montreal Expos game.  The Expos were playing the Cincinnati Reds (a nice coincidence since I was born in Ohio).  The Reds won 3-2.  I decided that baseball was more fun to play than to watch… 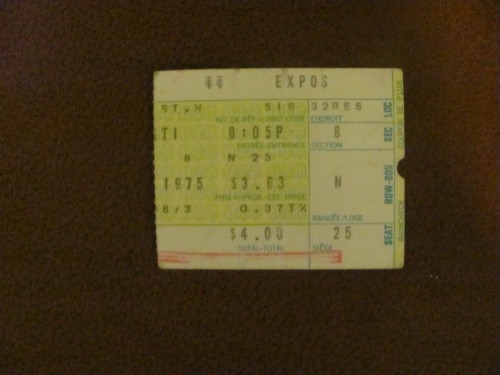 It was almost midnight by the time we got back to Isabelle’s house…I was exhausted, and went right to sleep.

We slept in Saturday morning, but had breakfast before we got back into the car to return to Isabelle’s school, where we’d board another bus and head to Old Montreal.  Our first stop was the Notre Dame Cathedral.    I was used to Methodist and United churches…I was shocked when we stepped into Notre Dame…I’d never seen so much gold and beautiful artwork outside of a museum!  I would have happily spent all afternoon there…

Then, we went to Man and His World, an amusement park that had been built as part of Expo ’67 when it was held in Montreal.  I’m not a big fan of amusement parks.  We saw a dolphin show at the aquarium, and went on a few rides.   My favourite was the log ride, which was very high…we got soaked, but it was fun!

For supper, we all went to a restaurant called Crèpe Bretonne, where I had real crèpes for the first time…mine were stuffed with apples, and had whipped cream on the top (I was so excited that I made crèpes for my family when I got home!).

After supper, we drove up to Mount Royal on the bus…it was a pretty view of the city lights at night from up there!  We got home very late again that night.

There wasn’t time to sleep in on Sunday morning…we had to be at Isabelle’s school at 8:45 to board another bus for a local marina.  We went on a boat tour on the St. Lawrence River, and then had a picnic for lunch.  After another bus ride back to the school, all the anglophone students boarded our bus and headed for home.  I was excited to see my parents and brother, and sleep in my own bed!

A few weeks later, the French students visited us…they had five days to spend in Ontario.  I don’t remember much of what we did, other than attending a dance at our school where some of the French kids got into trouble for smoking outside.  One of my classmate’s parents hosted an outdoor barbecue for the exchange students at their house…imagine inviting 60 middle school kids to your back yard!  I remember music and dancing, but not much else!

Isabelle and I wrote to each other for about a year after we met, even after her family moved to Baie Comeau.  Other than both being quiet girls, I don’t think we really had much in common, and we soon lost contact with each other.

While going through some boxes the other day, I found the little book we were given to keep a journal of our trip…the only thing written in mine was Isabelle’s name and address.  I wish now I had kept a better account.  I still have all of Isabelle’s letters though… 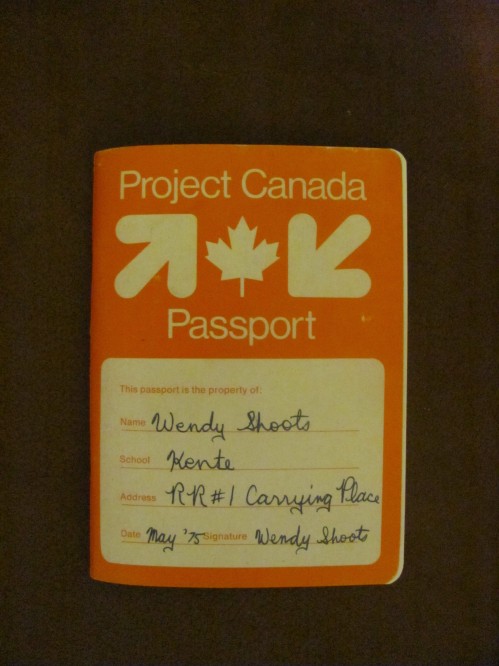