Wood That I Could…

Here’s another one from the archives…it was originally published March 29, 2010 in the first week of my blog.  It’s almost firewood delivery time again…enjoy!

I’m not bragging when I say that we live in a BIG old house (it’s a good thing with seven people in the family).  Instead of building a new one when the family got bigger, they just added on.  Consequently, we have two kitchens, two living rooms, a dining room, a laundry room, five bedrooms, two full baths, and two half baths!  With a house this size and the price of electricity, we appreciate our ability to use our wood furnace for heat.

When we found the house in late October, 2008, there was no firewood left in the basement.  Jim’s parents, and sister and brother-in-law donated some downed trees/brush from their yards to get us started, but I spent the next two months calling every place I could find trying to get wood.  After an exceptionally wet spring and summer (and the death/retirement of a couple of suppliers), firewood was in short supply.  Finally, in late January, I found someone in St. Stephen (an hour-and-a-half away) who had dry wood.  I paid an arm and a leg, plus delivery charges, for two cords.  I asked them to bring it around the back to the basement door, so we could stack it inside.

We came home from work to find that the load had been delivered…however, it was dumped in our driveway (right in front of where we normally park the car).  When I called the supplier, he explained that they had tried to get to the basement, but had gotten stuck in the snow.

That weekend, we rounded up all four kids, my dad, a couple of wheelbarrows (one of which had a wonky wheel), and even a snow scoop, and began the task of transferring the wood from the driveway to the basement.  Each trip was down a hill and around a corner in snow about eight inches deep – countless times, the load would fall off on the way down.  After retrieving the fallen cargo, the wheelbarrow would be taken down a ramp and dumped in the basement for someone to stack.  On more than one occasion, taller people forgot to duck going in, and clocked themselves on low-hanging beams.  It was cold, too!  Getting the wood in took several days.

We were, however, very happy to see the drop in our power bill from January to February – it went from over $700 to less than half of that!

When spring came, we resolved not to be caught without wood again…we called a supplier in Sussex who advertised in the newspaper, and arranged a delivery of five cords in July.  The price per cord was better, and there wasn’t an extra delivery charge!  I repeated my instructions to bring the wood to the back of the house, and told him I would leave a cheque in the mailbox for him.

We arrived home from work on delivery day to find…you guessed it: five cords of wood in the middle of our driveway!  I almost cried!  Deep ruts in the yard indicated where the wood truck had gotten stuck in the mud trying to get to the basement.  “I’m sorry, ma’am, but I had to get another truck to pull me out!” Wally the wood guy told me afterwards. 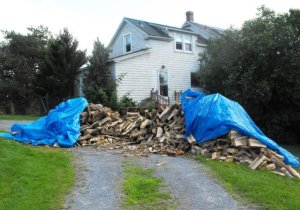 About 3/4 of the woodpile where it was dumped, completely blocking our "roundabout" driveway...

Jim and I, and my dad, worked away at the pile over the next few weeks (the kids were too busy bouncing on the trampoline/playing on their computers to help!).  At least it was summer, and we didn’t have to haul it through the snow this time!  We enjoyed working together, although we soon found out how out of shape we were!  We ate ibuprofen like M & M’s! 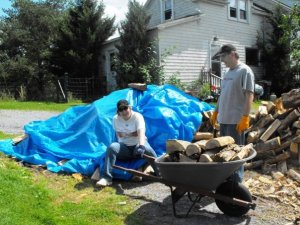 This is me right after I lost my balance and fell into the woodpile...

The wood was good, but it was also infested with earwigs, which I found in the most unsuitable places in my house for weeks after the wood arrived!  Someone left a Brita water pitcher out on the counter…we found an earwig between the insert and the pitcher…ewww!

One of the pesky critters which were all over the house...

Since the wood was a bit wet, Jim used his technical skills to rig up an ingenious drying system using a dehumidifier and a fan placed strategically in the basement.  It was successful, and the wood burned well when it came time to start the furnace up again in October.

Jim and I stacking wood in the basement...

Wally the wood guy called me last month to set up delivery for this year.  We decided he would come with another five cords in July…we both hope he doesn’t get stuck again!

Here, for your Wednesday reading pleasure, are some random happenings from my weekend:

1. My landlord and I had a fun discussion about our gardens on Friday when he came to collect the rent.  He told me that he had paid $1500 to install a solar-powered electric fence to keep the deer out of his, but that the bucks had recently started breaching security.  “I don’t know if they’re proving their manhood…they twitch a little when they go through, but do it anyway!”  It made me giggle to see his impression of the bucks as they passed through the current.  He said they had taken a bite out of every one of his beloved squash (he told me he was boiling them anyway)…I invited him to come and help himself to some of our “unused” squash!

2. A new bird has joined the flock which comes to feast at Jim’s Bird Feeder Smorgasbord: it’s quite shy, and just flits onto the deck and picks up the seeds the greedy goldfinches spill.  It’s a white-breasted nuthatch.

The Smorgasbord has been closed for the last couple of days as it had been raining most of last week, and the water had gotten into the feeders, causing the bird seed to sprout.  Not wanting to hurt our fine feathered friends, Jim has been washing the feeders out with bleach and soapy water, and will refill them shortly (he buys so much nyger seed at Bulk Barn, I think we should own stock there by now!).

3. It was a gorgeous day on Saturday…who would have thought I’d be sitting on our deck shelling orca beans in a T-shirt and bare feet on October 2nd (in case you’re wondering, I was also wearing jeans!)?

4. I’m liking this “give Mom a break” thing we started with cooking.  On Saturday, Jim made an amazing pot roast with potatoes, onions, carrots, turnip, rutabaga (from our garden), peas, corn, and homemade gravy.  Last night, Anna and Hope made Chinese food…it was awesome!  The kids are cooking again Friday night…can’t wait to see what they have planned!

5. Anna was taking pictures of one of our resident grey squirrels through a window the other day…when it saw her, it started launching itself towards the window!  It did it at least twice…

6. Saturday night, Jim and I went to see the new movie, “The Social Network.”  In case you haven’t heard, it’s about how Facebook got started.  It was quite an interesting social study…Jim liked that the technical parts were accurate!  The writing is very good, but it’s definitely not an “easy” movie…the teenagers talking behind us made it somewhat difficult to follow sometimes!  The way Mark Zuckerburg’s character talked was sometimes reminiscent of “Rain Man.”  Jim had to go for a pit stop in the middle of the movie…while moving my knees out of his way, I managed to dump half my box of Raisinets on the floor (glad I bought them at the Dollar Store and not the theatre – that would have been an expensive accident!).

7.  Sunday morning, I started boiling down tomatoes from the garden for pizza sauce.  Jim wanted me to make calzones similar to what we’d had last week at a local restaurant.  There were quite a few tomatoes, and it took them several hours to get thick enough for sauce.  I added minced onion and garlic, chili powder, parsley, sage, rosemary, thyme, Italian seasoning, salt, pepper, and sugar.  It was delicious!  Then I made the calzones, which while easy, take time to shape and fill (I used pepperoni, fresh mushrooms, and mozzarella cheese, along with the sauce).  We ate late that night, but they were good!  I had a whole bag of pizza sauce left, which I put in the freezer for another time.

Two of the finished calzones...yes, that's a dinner-sized plate! Yummy!

8. In the afternoon, we went over to Jim’s parents to pick up some firewood.  While they were away visiting relatives last week, a big maple tree in their back yard had fallen down during a windstorm, narrowly missing their carport!  They offered us the wood.  We filled up the back of the van…we went back to get the rest last night.  It should be close to a cord…that will save us some money next year!

9. Sunday night, Jim and I went to the Blue Olive to see Rose Cousins, one of our favourite folk singers.  She was her usual, funny, charming self, although she was fighting a cold…she joked that a Canada Goose had gotten into her nose.  Rose introduced us to a couple of other singers who are just starting out: Heather Green and Ria Mae.  We liked them both, and especially enjoyed the end where everyone sang together!   There had been a mixup with our tickets, and our seats had been given to someone else…to compensate, the hostess paid our tab for the night (which would have been higher had we not been drinking pop – Jim did get a nice Greek salad, though).  We sat with our friend, Stephen Webb, from CBC.  Jim grew up with him.

10. I was out picking tomatoes Monday night, and got into a mild disagreement with a doe.  There was a whole group of deer out there, quite close to the fence, and I waved my arms and yelled at them to make them move away (Dad is terrified that they’ll get into the garden some day!).  They did move, but one stubborn female stayed closer than the others…she stomped her foot and snorted at me.  I waved my arms and told her to “Git!”  She stared at me like my kids do when I’ve told them to do something they have no intention of doing…she snorted and stomped again.  We repeated this exchange for about five minutes before she and her posse hightailed it into the woods.  I win!