Has Anyone Seen My Dashboard?…or…She’s BAAACK!

“The report of my death was an exaggeration.”  Mark Twain

I actually wasn’t dead, just working so much that Blogland was like Never Never Land…a place I never had time to visit.  That chapter in my life is now finished – the temporary, seven-week job turned into seven months with a somewhat disappointing ending – I didn’t get the permanent position!  However, certain facts came to light during the last month as I was training my replacement (yes – I’m that much of a patsy), and I’m rather glad someone else will have to deal with those “challenges” (which is corporate speak for things that are FUBARed).  I had a lovely going away party, and have made several wonderful friends.  I expect to be happily unemployed at least for the next few weeks…getting a new job in December is next to impossible!

So, WordPress has been changing things around while I’ve been gone…I really had to search to locate my Dashboard!  Once I get this post written, I hope to get around and visit all my blogging buddies and at least read their latest posts (sadly, I deleted more than 1500 unread e-mails this morning – they were stressing me out – best to start fresh!).  I’ve missed everyone so much…please forgive me if I’m ignorant of what’s been happening in your lives lately!

Okay…so in my last post, some (gulp!) four months ago, the deer had totalled my garden (it’s still completely useless, and the grass the landscapers planted in my devastated back yard isn’t growing!).  Jim and Devin have replaced the fence that was ruined, but we will definitely have to make it higher with wire, as the deer still sail over it like Olympic high jumpers (I refuse to award medals – it’s too hard to get the deer to stand still to put them around their necks!).  Ironically, to control the ballooning deer population, the powers that be in our province decided to allow hunting them with crossbows during the gun hunting season.  To protect our family and our dog, we bought multiple “No Hunting” signs at the Dollar Store and posted them around the perimeter of our (landlord’s) property.

Jim and the girls returned safely from their amusement park vacation (without me!), although there was a slight mishap which involved Hope losing $40 cash which she had placed in the cupholder of the van for “safekeeping”.  When the van door was opened near the top of Mt. Washington, the wind carried the money away (some $80 in total).  Jim scrambled down an embankment to save one $20 bill, while another two sailed over the cliff.  The last was later found by Anna on the floor of the van.  When I asked Hope why she didn’t have the money in her purse, she told me that she was afraid of being mugged: “Americans are sketchy, and they carry guns!” (please don’t take this personally…Hope’s 13, and she watches way too much Criminal Minds!).

My granddaughter, Elise, celebrated her second birthday on September 9th.  Kaylee and Scott had a barnyard-themed party for her. 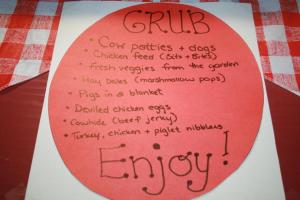 Menu for the Party 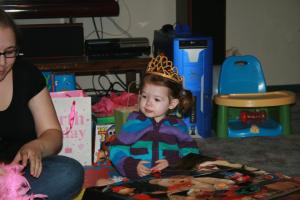 Elise wearing the sweater Gramma got for her...the tiara was not my purchase!

A few days after the party, Elise made an announcement on Facebook:

Elise has some news...

Everyone is very excited!  The new kid has some big shoes to fill…Elise is a tough act to follow!  She’s PERFECT, and I’m not just saying that because I’m her Gramma (well, maybe I am!).  I don’t know of many kids who know all of the alphabet (as well as punctuation marks), and the sound each letter makes, before their second birthday!

This is getting a little long, and I’m getting hungry for lunch…I will leave you with this amusing anecdote from a couple of weeks ago:  I was talking to a single woman friend of “a certain age” who was lamenting the difficulty of finding a suitable partner for casual “whoopee”.  “I don’t want to get married,” she said.  “I just want an occasional roll in the hay, but I don’t want to be one of those…what do you call them?…JAGUARS!”