I was one of a very few people who didn’t watch the Academy Awards last night.  To be honest, watching a bunch of people wearing shoes that cost more than I spend on food in a month doesn’t excite me.  I also prefer books to movies…always have.  That being said, I decided to do an Oscar piece today, but I am dedicating it to “Oscars” I find infinitely more interesting than the Hollywood ones:

1. Oscar Brand.  Born in Winnipeg in 1920, Brand moved to the U.S. as a young man.  In addition to being a folk singer, songwriter, and author, Brand is also the host of the longest running radio show with the same host: Oscar Brand’s Folksong Festival has aired on New York’s WNYC-AM almost every Saturday night since December 10, 1945.  From 1963-67, Brand hosted a Canadian TV show called Let’s Sing Out! which featured previously unknown Canadian singers such as Joni Mitchell and Gordon Lightfoot.  Another one of Brand’s numerous claims to fame was serving on the original board of the Children’s Television Workshop, which was behind the creation of Sesame Street.  It is said that the “Oscar the Grouch” character is based on Brand.  Over his long career, Brand has composed more than 300 songs, and released nearly 100 albums.  His songs have been used in movies, TV and stage productions, and even commercials.  Brand is the author of seven books, including Songs of ’76: A Folksinger’s History of the Revolution. 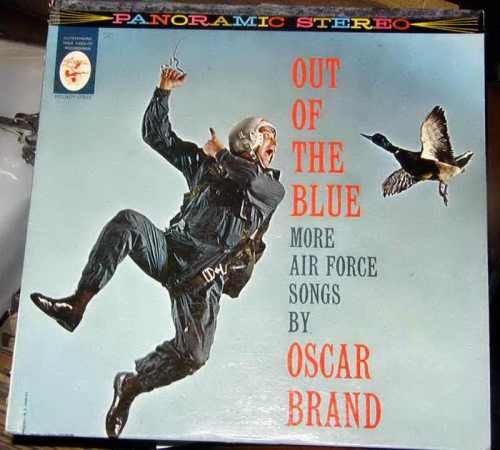 2. Oscar Howe.  Born on a Plains Indian reservation in South Dakota in 1915, Howe overcame physical and emotional obstacles to become a well-respected artist and sculptor.  The young Howe began drawing before age 5, but was discouraged by his father, who confiscated his pencils and proclaimed art “foolish”.  Howe switched to using charcoal from the stove, and when that was also taken away, used sticks to draw in the dirt.  Like other natives at that time, Howe was sent to an Indian school, but was sent home at age ten because he had a severe, disfiguring skin disease complicated by a case of trachoma, which threatened the boy’s sight.  There was no money for medical treatment, so Howe used commercial soap every day for months until his skin cleared up, and the eye affliction abated.  He went back to school, graduating in 1933.  After securing a job on a road crew, Howe came down with tuberculosis…this led to his enrollment in the Sante Fe Indian School, where he was chosen to participate in an art program known as The Studio.  Howe’s first painting sold for 50 cents…half the money went to the school.  After graduation, he taught art at the Pierre Indian School, the school that had sent him home.  Howe later was an art instructor at the Pierre High School.  After serving overseas in WWII, Howe became Professor of Art at the University of South Dakota.  In 1958, he sent one of his most innovative paintings to a national Indian Painting Competition at the Philbrook Museum.  It was rejected as not being a “traditional Indian painting.”  He sent a scathing letter to the organizers, which was enough to move them to change the rules to allow for individuality.  Howe died in 1983. 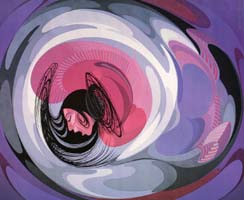 The title of this Howe lithograph is unknown...I like it...

3. Oscar Pistorius.  Pistorius is a Paralympic athlete known as “the fastest man on no legs” and the “Blade Runner.”  Born in South Africa in 1986, Pistorius was missing both fibulas, so a decision was made to amputate his legs halfway between his knees and ankles when he was 11 months old.  As a boy, Pistorius didn’t let what many considered to be a disability slow him down…he played rugby, water polo, and tennis in school, as well as being on the wrestling team.  After sustaining a serious rugby knee injury in 2004, Pistorius was introduced to running, and hasn’t stopped since.  He holds the world Paralympic records in the 100, 200 and 400-metre events and has competed against “able-bodied” athletes and won.  Pistorius’ career has been filled with controversy because some people in the sports community felt that the Cheetah Flex Foot prothesis that he uses to run give him an “unfair advantage.”  After failing in his bid to qualify for the 2008 Olympics, Pistorius is now focussing on training for the 2012 Games in London.  When he’s not training, Pistorius will be modelling, having signed up to be the “face” of Thierry Mugler’s men’s fragrance, A*Men. 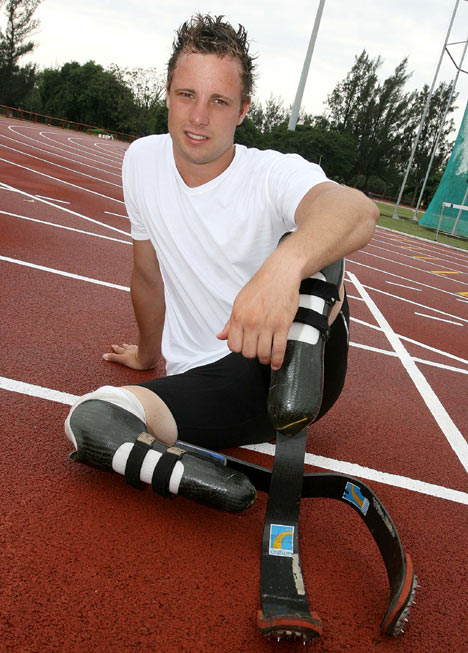 4. Oscar Quam.  Born in Minnesota in 1887, Quam was known as “the professor of duckology.”  He started a family business making duck calls and decoys in the 1920’s, which his children kept going until 1972 (Quam died in 1969).  Quam believed in charging a fair price for his work: the average call cost between $2.50 and $3.50 in the early 1940’s (fancy inlaid ones might cost $15)…Montgomery Ward ordered 10,000 of the $3.50 ones.  Quam also taught duck calling techniques on radio shows, and wrote for outdoor magazines.  His original duck decoys were made of wood, but he later switched to cork, which was lighter.  Here’s a recording of Quam demonstrating some duck calls:

5. Oscar Rejlander.  Born in Sweden about 1813, Rejlander is known as “the father of art photography” and studied art in Rome before trading his paintbrushes for a camera.  He moved to England in the mid-1840’s, where he opened a portrait studio in Wolverhampton.  Rejlander was a friend of Charles Dodgson (aka Lewis Carroll), and later created one of the best-known portraits of him.  Undertaking many experiments to perfect his work, Rejlander is credited with inventing combination printing (each print consists of images from several different negatives) in about 1853.  Queen Victoria and Prince Albert were patrons of Rejlander’s, and among others, purchased a copy of one of his most controversial works, The Two Ways of Life.  In 1862, Rejlander moved his studio to London and continued experimenting with double exposure, photomontage, photo retouching, and retouching.  He also did popular “social protest” photos of homeless street children.  In 1872, Rejlander’s photos illustrated Charles Darwin’s book, The Expression of the Emotions in Man and Animals.  Rejlander died in 1875 after a serious illness. 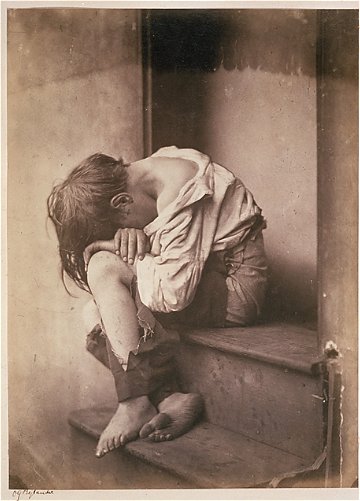 Rejlander's "Poor Joe"...this portrait is a re-enactment of a scene Rejlander saw on the streets of London...

I hope you’ve enjoyed this foray into the world of “Oscars”…more fun for me than boring celebrities dressed like waiters!