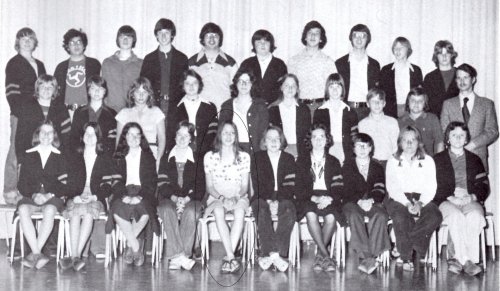 You know that Sesame Street song that goes: “One of these things is not like the others, one of these things just isn’t the same…”?  Well, that was me in my Junior High School Band photo (which was the only picture of me in our Grade 9 yearbook – I was absent the day they took the class photos).  I believe that we were told to wear a dark skirt.  I’m wearing what was probably the only skirt I owned…it was light blue, and I may have made it in Home Ec.  Since I almost never wore skirts, it didn’t occur to me to close my “chicken legs” (at least I wasn’t the only girl who didn’t think of it).  I had ordered a band sweater, but it didn’t come in time to wear it for the picture.  Notice the other girl in the front row without a sweater is also wearing buffalo sandals…it was not planned!

The blond boy at the end of the middle row on the left was one of my first boyfriends…his name was Steve, and he played the tenor and baritone saxophones (I still love sax today!).  He was sweet and funny!  His parents must have hated me though…I used to call him all the time (can you say “stalker”?).  I was sorry to hear in 1984 that Steve had been killed in a motorcycle accident…I wasn’t surprised however.  He’d always loved to go fast…I remember him scaring me one time when we went out in the motorboat at his family’s cottage.  Waterskiing was another one of his favourite things…he used to do tricks on one ski!

Our Band Director was Mr. Williams, or “Willy” as we called him.  Willy was committed to making us into decent musicians (if we didn’t cause him to be committed first!).  It’s a good thing we practiced in a soundproof room in the basement!  I remember Willy leaving the room on several occasions when he got exasperated with us!  He was hilarious to watch when he conducted, especially from the back!  He used to bounce up and down on his toes, and wave his arms around wildly when it was a fast song!

I played the flute.  My parents bought it for me on one of our trips to the States.  It took me a week to even get a sound out of it, but I was stubborn and kept at it until I did!  I was always “second flute” though…I could never narrow my airstream enough to hit the high notes.

Our repertoire included several classical pieces, as well as modern songs like “The Hustle” (the flute part was fun to play), “The Way We Were”, the theme from “Shaft”, the theme from M*A*S*H, and later on, the theme from Star Wars, which had just come out in theatres.  We always played “Pomp and Circumstance” at graduation too.

One of the best parts about being in the band was the social aspect: at our school, the jocks were the coolest, but the band kids were the second coolest (and usually the smartest).  We were strictly a concert band (which was good for me – I would have had trouble walking and playing at the same time).  We often travelled to local elementary schools to perform.  I enjoyed showing the little kids my flute and demonstrating how to play it.

I was in Junior Band for two years, and Senior Band for one…sadly, I couldn’t fit Grade 12 music into my schedule.

I have fond memories of my years in the bands.  I sold my flute 28 years ago to help pay off a student loan, but I bet I could still play!

Be sure to check out Ironic Mom, EduClaytion, Six Ring Circus, and Lessons from Teachers and Twits for their School Picture Day posts!