I haven’t done a rambling, random post with lots of food in it for a while, so here’s one for you:

1. Anna convinced me to buy her some pre-made fondant at Bulk Barn a couple of weeks ago so she could do some cake decorating…last summer, she and Brianna had made fondant from scratch for a cake for Jim’s birthday, but it was apparently a sticky nightmare to work with.  So Mom forked over $16.00 for 4 lbs. of fondant.  Anna made yellow cake, which looked like this when she finished decorating it: 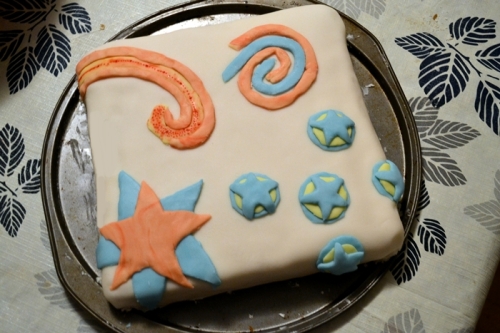 Anna's Star Cake...she cut out the stars freehand with a knife...

2. Kaylee and Scott came over for supper on Sunday…I made gingerbread for dessert (sorry, no photo…it’s gone!).  Lucky Scott found the “bonus hair” in his!  I apologized profusely, but he seemed okay with it (of course, he might have been scared to make a big deal…would you yang at your mother-in-law about her cooking?).  Apparently, Kaylee’s hair is all over their house, and hers is a lot longer than mine!

3. Speaking of hair, I finally got to the hairdresser this week after four months (I normally go every 6-8 weeks).  My grey is gone again (Anna says I look like a “ginger”) and Heather cut about 4″ off the bottom.  I now have a somewhat sexy bob (which unfortunately accentuates my fat cheeks!).  I’m waiting for the last of the snow to melt so I can get out my bike and get rid of the extra inches around my middle!

4. Devin got his learner’s permit last week…Jim is looking forward to passing the torch to Devin as “family chauffeur” once he gets his license!  Anna and I are next! 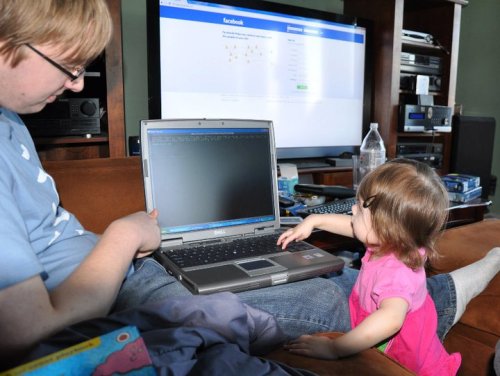 Elise and Uncle Devin checking out "Dwarf Fortress"...photo by Jim

5. Hope, Dad and I enjoyed a feast of Chinese Chicken Hearts early this week (no one else in the house will eat them, although Kaylee converted Scott and his friend!).  I sauté them, and then add soy sauce, garlic powder, ginger, and brown sugar…yummy!  I made rice pilaf with chicken for the non-heart eaters. 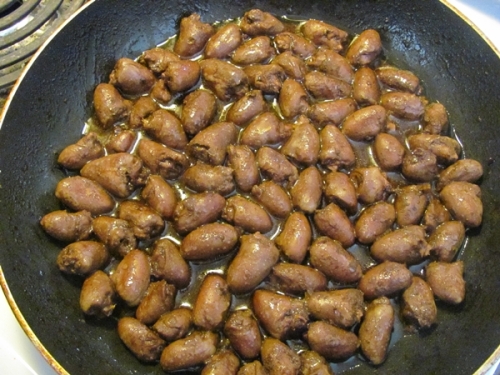 6. I was excited to pick up my seeds for the garden last week!  I can’t wait to start planting the indoor stuff.  I’m going to try leeks, kale, arugula, spaghetti squash, a yellow tomato called “banana legs”, and a black cherry tomato for the first time this year.  I was dismayed to discover that I only have three bags of green beans left in the freezer…will be rationing those from now on!

7. I was supposed to donate blood today, but found out that the clinic was cancelled…I’ve been drinking (water) like crazy all week, to avoid the problem I had last time.  I read somewhere that drinking a couple of glasses of water a half hour before one eats is a good weight loss tool…it makes your stomach think it’s full sooner, so that you don’t eat as much.  I tried that yesterday with my Chinese food at lunch…my stomach told me it was full, but I pretended it was one of the kids and ignored it!  Today I’m paying for that beef and broccoli…the day I stop eating red meat all together is looming!

8.  The Pillsbury Dough Boy is 50 years old today…how ironic that a big-bunned girl like me was born the same year as a guy known for his rolls! 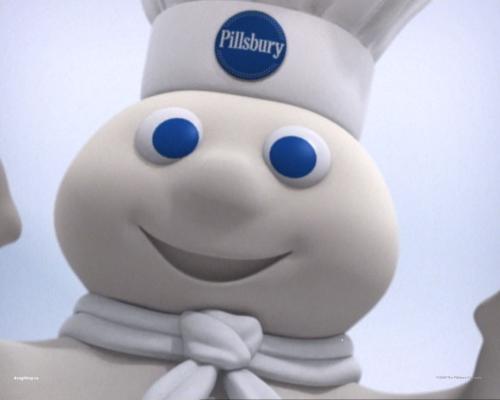 "Wow...you made me a cake?" Photo of Pillsbury Dough Boy from about-recipes.com

9. Jim decided to make banana bread at 10:00 at night on Tuesday night…the two loaves are nearly gone three days later!  Kaylee sent me a recipe for soft pretzels, but it only makes 10, which would disappear in about five minutes at our house!

10. Hope came home from cheerleading with an injury on Wednesday…she had gotten hit in the face while trying to catch their flyer.  Her glasses dug into her nose, and her nose was dented and bruised.  Anna messed up her knee at her cheerleading practice on Thursday.  She used a bag of frozen corn as an ice pack last night.   Competititions start in a couple of weeks…I hope they’re better by then!

11. I got some awesome new cookie sheets last night…ours are getting really decrepit.  The ones I got are heavy Pyrex brand, non-stick ones for only $6 each…I bought two.  They even have the spots for cookies marked on them…how cool is that? 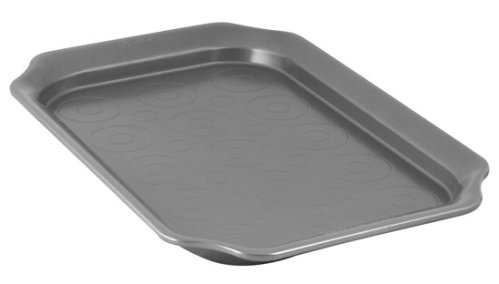 Pyrex cookie sheet...see the markings for those of us who have trouble making straight rows? Photo from productreview.com.au

12. Elise is getting some experience tasting international foods.  Kaylee has a cyber-friend in Ireland named Clodagh (they’ve been friends about ten years), who sent her a book recently.  Knowing Kaylee’s penchant for UK foods, Clo thoughtfully included some Prawn Cocktail Skips (shrimp-flavoured chips), Jaffa Cakes (chocolate covered cookies with jelly in the middle), and Barratt Nougat (chewy candy) in the package.  Here’s a video of Elise trying the Prawn Skips (Scott is not a fan!):